Baltic Eagle is a 476-megawatt offshore wind farm being built by Iberdrola in waters of the Baltic Sea, some 28 km off the north-east coast of the German island of Rügen, in Mecklenburg-West Pomerania. The wind farm covers an area of 40 km2 and is the second offshore wind initiative for Iberdrola in Germany. Upon completion, the wind farm will generate enough renewable energy to meet the needs of over 475,000 homes while preventing the release of nearly one million tonnes of CO2 each year. With a total investment of over 1.1 billion euros, commissioning is expected for Q1 2024.

Together with the first offshore wind farm Wikinger, Iberdrola’s wind cluster will cover around 85% of the total electricity consumption of the Federal State of Mecklenburg-West Pomerania, helping Germany to fulfil its emission reduction targets.

The company was awarded the project in April 2018 in the second tender for offshore wind energy by the German Federal Network Agency (BNetzA).

The geotechnical and geophysical phase – at a cost of over 10 million euros – has already been completed. In this key phase, the data obtained was used to determine the design of the foundations on which the turbines and substation will be built. The foundations will be anchored at a depth of up to 45 meters in the seabed.

Iberdrola on the island of Rügen

With the construction of the second Baltic Eagle wind farm off the north coast of Rügen, Iberdrola Renovables has established itself as an integral local player on the popular Baltic Island. By investing billions in offshore wind power in Mecklenburg-Vorpommern, the company has underscored its long-term commitment to the region. Iberdrola is thus promoting local and regional value creation, creating highly skilled jobs during the construction phase of the new wind power project and additional long-term jobs at its base in the port of Sassnitz-Mukran. The company plans to remain involved in the region as a strong partner in the ongoing energy transition. 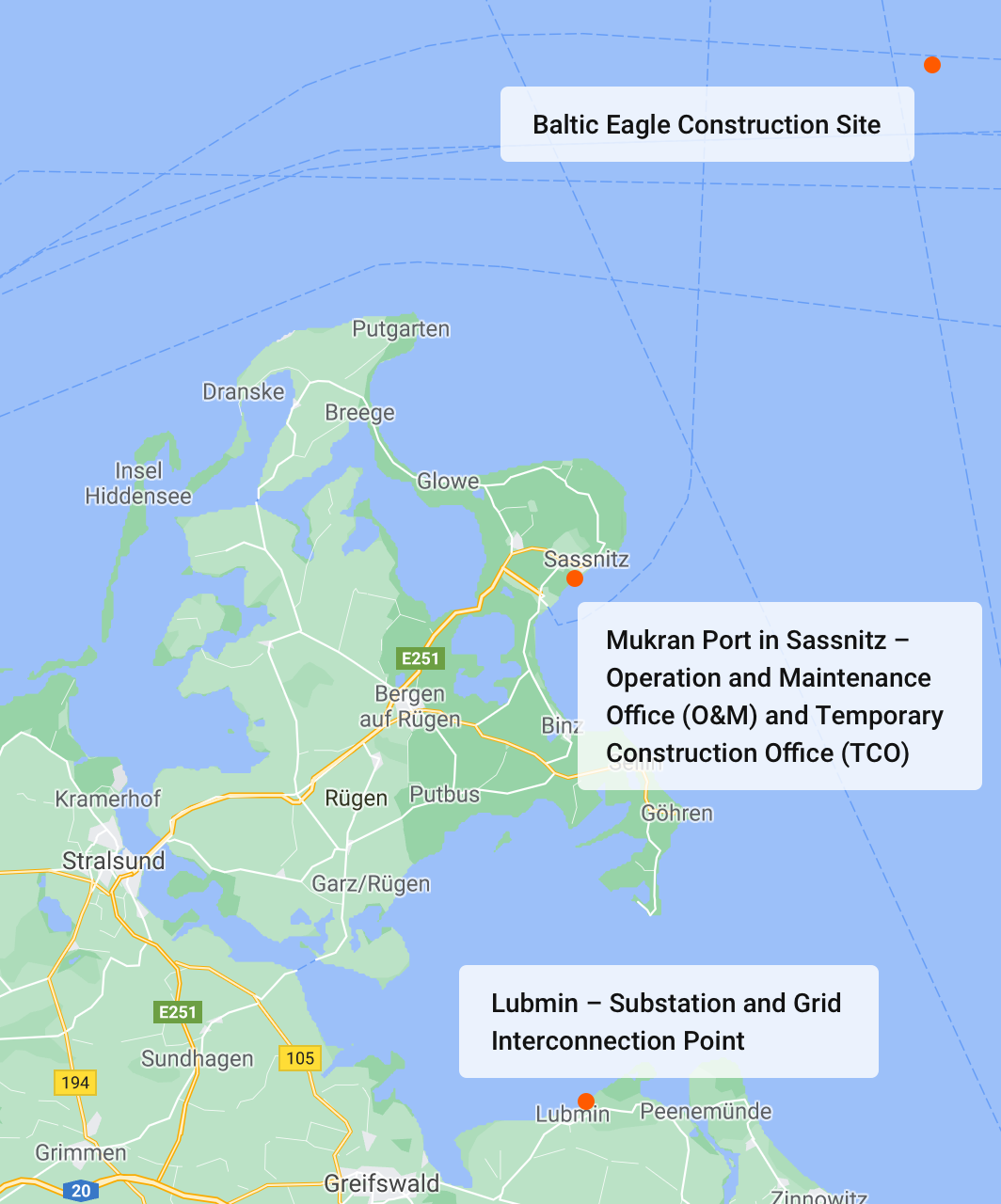 Facts and figures on the Baltic Eagle Wind Park

The electricity generated will be transmitted at a voltage of 220 kV from the offshore transformer platform in cooperation with the transmission system operator 50Hertz via two 90-kilometer-long high-voltage submarine cables to the Lubmin landfall point. At the Lubmin grid connection point on the coast of Mecklenburg-Vorpommern, the renewable electricity will be fed into the power grid.

The construction of the wind turbine towers begins with the erection of the foundations which are directly integrated into the seabed of the Baltic Sea. For this purpose, monopiles and transition pieces are produced specifically for the Baltic Eagle wind farm. The monopiles will be delivered from EEW’s Rostock factory to the Baltic Eagle construction site, while the transition pieces will be temporarily stored at the ferry port of Sassnitz on the island of Rügen. The offshore wind turbines of type V174-9.5 MW will be delivered directly from the island of Bornholm in Denmark. The transformer platform will also be shipped from its fabrication site in Belgium to the offshore construction site without any intermediate stop. After the installation of the wind turbine foundations and the laying of the inner-park cabling by Van Oord, the offshore transformer platform can be commissioned as early as in 2023.

The final delivery and installation of the wind turbines will complete the construction phase and is scheduled for the first quarter of 2024. As soon as Baltic Eagle’s connection to the German power grid has been established, emissions of around one million tons of CO2 per year can subsequently be avoided.

Iberdrola was awarded the second offshore tender by the German Federal Network Agency for the construction of the Baltic Eagle offshore wind farm with a total capacity of 476 MW.

Cooperation with transmission system operator 50Hertz on the grid connection of Baltic Eagle and fabrication start of the offshore substation (OSS) in Belgian shipyards.

2023
Start of the installation phase

The Dutch company Van Oord installs the foundations and the inner-park inter-array cables for Baltic Eagle. The OSS is installed and commissioned.

2024
End of the construction phase

Iberdrola plans to expand its total capacity in Germany up to more than 1.1 GW.

Iberdrola is one of the world’s biggest energy companies, a leader in renewables, which is spearheading the energy transition to a low carbon economy. The group carries out renewables, networks and commercial activities and supplies energy to almost 100 million people in dozens of countries. With a workforce of more than 37,000 and assets in excess of €122.5 billion, in 2020, it achieved a turnover of €33 billion and a net profit of over €3.6 billion